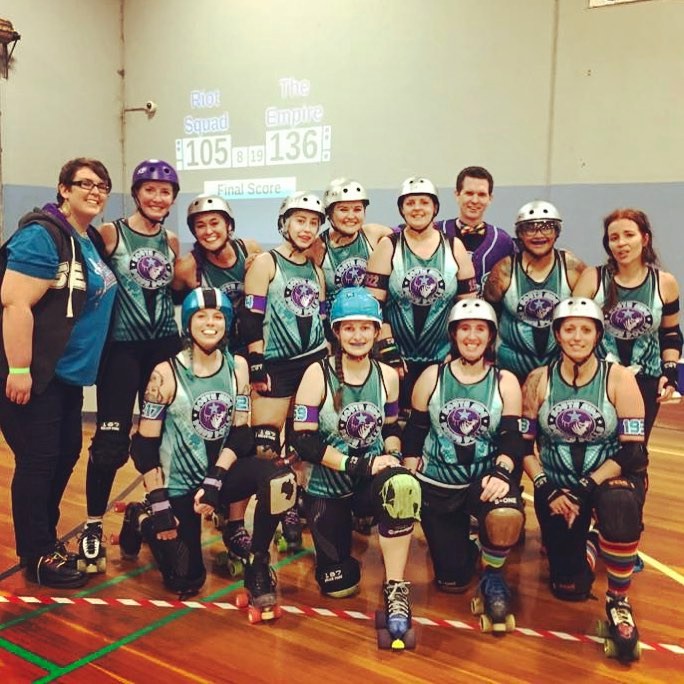 It’s been interesting over the last year for me as I explore where coaching for software teams and  coaching for sports people overlaps. This year I got to be coach for a Roller Derby team which is the first time I’ve called myself a coach for more than a brief workshop. In my day job I’m involved in many activities that have nothing to do with coaching so I rarely call myself an Agile Coach. But to that sports team I am the coach. And while  I’ve been involved with Roller Derby for 5 years I have very little training in coaching sports teams so I started applying all the things I’ve learned coaching software teams.

We built a manifest of shared goals

I can’t take all the credit for this one as the team created one before I joined them as coach. But I couldn’t be more happy with it as that was one of my first goals. I wanted something that helped defined who we are as a team distinct from other skaters and teams. I also wanted to spell out what our values were to make it clear what my coaching goals should be and should not be. The team wanted to be taken seriously as a competitive team. They also wanted to value the contribution of every team member equally. I’ve experienced similar goals with software teams that were trying to come out of obscurity or a position where they felt they were not getting respected by the larger organisation.

We frequently inspected and adapted

Often at the end of doing a drill I would bring people together to discuss what was working for them and what wasn’t. Experimentation at training is actively encouraged as we try things out as individuals and as a team to see if something new is a better fit. Then after a game we will again talk about what was working and what didn’t during the game. What are we doing well that we should do more of? I try to embrace what Woody Zuill calls “Turning up the good” to keep building a positive message rather than focusing too much on our weaknesses. I never called it a retrospective but in my head that’s what I was facilitating.

I would embrace feedback and adjust my own actions

Sometimes during a drill an experienced skater would say something to me like “They’re not doing X”or “We need to focus on Y to get this right”. So I’d take than on board and sometimes use that in our very next drill. It’s not a criticism of me or the people they are observing. It’s an observation on what we could be doing better so let’s do that now!

It can be very tempting to look at the plays top level teams do and ask your team to try and do that. But it’s too much too quickly. Where are they at skill wise? What small steps can they make to get a little better? What strengths can they leverage to help them get there? It meant sometimes ignoring feedback from experienced people as they would want people doing the high level skills they have already mastered. But the team as a whole may not be ready for something that advanced and needs to build up towards it.

Sometimes it’s valuable to just practice basics as a team

Just like you can use a programming Kata to get a team learning TDD, Pair programming or Mob programming. Going through basic drills as a team helps a group of individuals adjust to being a team. There was only a handful of people that came with the team from last year so for most it was a big adjustment. And I’ve seen with software teams that even changing one person can have a huge impact on the dynamics within a team. Give them a safe space to explore those new dynamics and figure out how to best make it work.

Happiness is a leading indicator

I never enforced attendance or got angry at people for being late. No one was being paid to be there so I knew it was important to keep things fun and rewarding. But for me it was also an important indicator of where people where at. If someone stopped coming to training I could ask them if anything was wrong offline and see if there was anything within the team I needed to address. If a things dropped back more generally then I could try and find out if there was something in the team or about the training that was putting people off.

I would definitely recommend any Agile coach try their hand at coaching in a different field. The differences and similarities can help inform how you approach coaching in general. I’ve also found it useful to talk to other sports people about where these practices overlap. Training an experienced athlete is often asking a series of questions to open their mind to ideas. Much like coaching experienced developers.